You are here: News and Events » Exciting English in KS1 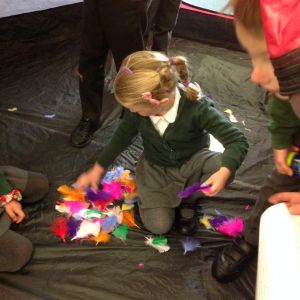 When we returned to school in September, children in KS1 were excited to find a letter in a bottle from Jack and Nancy, our story characters from the book of the same name by Quentin Blake. They informed us that they had been on an unexpected journey to a faraway island, after being blown away when a giant gust of wind caught their umbrella! We wondered how the letter had reached us and thought perhaps one of the parrots from the story had brought it. Children have been busy learning the story and using it as inspiration to write their own journey stories.

This week, we were surprised by Jack and Nancy again! This time, they had been camping in our classrooms over the weekend! On Monday, we came into class to find their tent still there, along with another letter. We even found some colourful feathers and some of us suspected that we had heard a parrot in the playground... Children were enthused to write their own letters back or record the clues we found. Jack and Nancy wished they had a tent for their adventure since they had to sleep in trees. Over the next couple of weeks we are going to write them instructions of how to make a shelter, in case it happens again. We will use the instructions of how to put up a tent to help us.