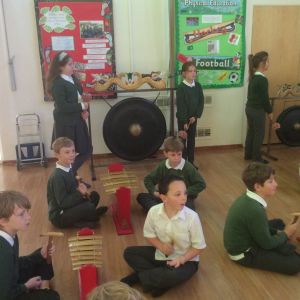 The children from Oak, Elm and Maple Classes had a fantastic time during International Week!

Our focus for the week was America. We looked at maps and went on a treasure hunt around the field to discover more about America's 52 states to start off the week. Later in the week we were treated to a fantastic Q&A session with Mrs Martin, who taught us so many new and interesting facts about Texas (her home state). Did you know Texas is bigger than the whole of France!?

During the week we also learnt more about America's original people The Native Americans. We found out a bit about what life was like for them in their tribes and heard the legend of the dream catcher. The children were challenged to create their own dream catchers which required a lot of dedication but the end results were a success!
The children were also treated to workshops and special visitors during the week. They played in a Gamelan orchestra, ate in the French café and were enthralled by Peter Chand's riddles.

The week ended with a fantastic food tasting Friday