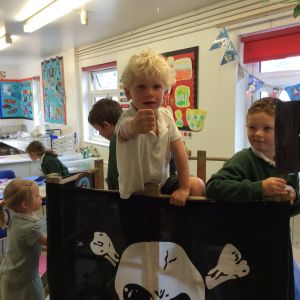 Over the past two weeks the children in Foundation Stage have been learning all about pirates!

They have been looking at the story of ‘The Night Pirates’ and writing letters to Captain Blackbeard about why they would be a good pirate. They have also been creating lots of pirate props such as hats, telescopes, maps and parrots. The children have enjoyed engaging in pirate role play, dressing up and giving orders such as walking the plank.

Tommy - “I made a pirate patch and a telescope”.
Sophie – “I liked playing on the pirate ship because it was fun”.
Magnus – “Playing with the sword and fighting other pirates”.
Harriett – “I liked making the parrots using different colours”.