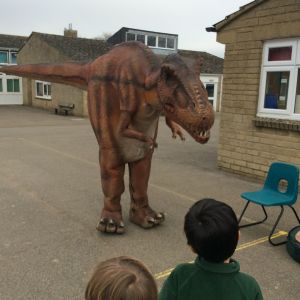 Yesterday the children in Foundation Stage had two very exciting visitors. They got to meet Jack the baby Allosaurus and Sophie the ginormous T-Rex.

The children also got to be palaeontologists and went on a dinosaur dig. They found many interesting fossils, from the footprint of an Iguanodon to the claw of a Velociraptor.